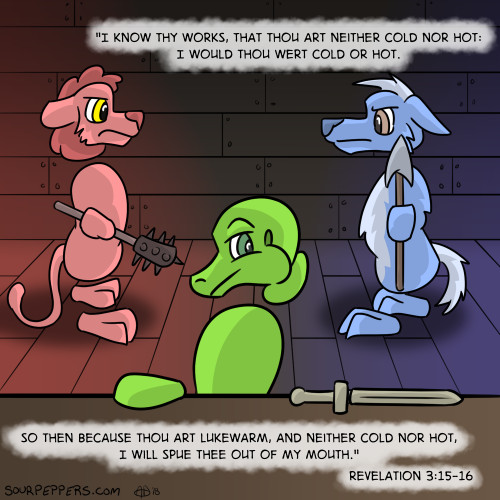 Is it better to be sincerely in error, or to be lukewarm about the truth?

One of Christ's biggest criticisms of the Pharisees and other self-righteous, non-believing Jews at the time was that they knew the Law of God, and yet they were complacent. The felt superior to other nations because of their knowledge of the things of God. And yet Jesus hinted that the heathen nations and even the likes of Sodom and Gomorrah would fare better than they (see for example Matthew 11:23-24).

How often do those of us who know the truth of the Gospel leave our swords sheathed and unused, while those who are in error only because they know not where to find the truth (D&C 123:12) energetically proclaim and defend their own beliefs? How often do we think we are better than they, for the simple reason that we have learned and accepted the Gospel? And yet we know that God looketh on the heart (1 Samuel 16:7). We've seen evidence of those who were zealous about things which were not true, and then upon learning their error, promptly repented and then were just as--if not more--zealous about the truth (Saul turned Paul is one of the most dramatic examples of this). Furthermore, we know that the dead who would have accepted the Gospel if they'd been permitted to tarry on this earth will be heirs of the Kingdom just as if they had done so (D&C 137:7). And that, of course, is only up to God, who will be the perfect Judge of the thoughts and intents of all men and women, according to the knowledge they received on this earth.

It is the duty of every person to do what they can to discover the truth, and then act according to whatever knowledge they have received. The everlasting Mercy of God, afforded to us by the Atonement of Christ, will make up for our deficiencies. But not if we are lukewarm and indifferent about that knowledge.
at 4:22 PM