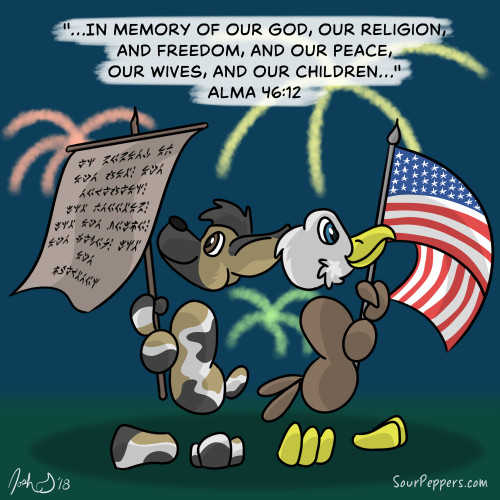 Thousands of years ago, a man wrote these words on a cloth that he affixed to a pole. It has since come to be known as the "Title of Liberty." There were those in the land who sought to take their freedom away. There were also those who should have been allies to the cause of freedom, but who refused to defend their country, hoping to benefit from the political turmoil that would result if their enemies succeeded in overthrowing the government. Moroni--the man who erected the Title of Liberty--reminded his countryman of the things they held dear; things that were worth protecting and fighting for. Things far to dear to be given away, let alone for something so cheap as spite or the chance to gain power.

There are influences in the world today that threaten to take away our own liberties. We mustn't be fooled into thinking those influences come from only one person, political party, country, etc. It is often tempting to trade principles of liberty, fairness, compassion, and loyalty for personal or political gain. But remember the things our ancestors fought for, and remember that they still need defending.

Happy Independence Day! It may be an "American-centric" holiday, but independence from any influence that would seek to limit our liberty is worth striving for and celebrating, no matter where one may live.
at 4:05 AM