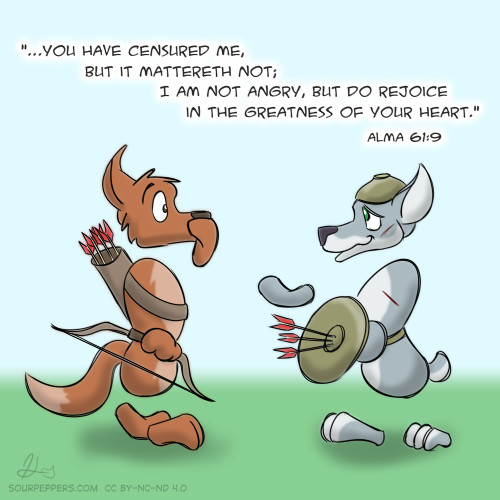 The Book of Mormon tells the story of a lengthy war between the Nephite and Lamanite nations. Moroni, captain over the Nephite forces, sent a strongly worded letter to Pahoran, chief judge over the Nephites, all but accusing him of being a traitor to his people for not sending enough supplies and reinforcements for him to be able to adequately defend his people. Alma 61 contains Pahoran's response, in which he explains that there was an insurrection at the Nephite capital, which had prevented him from being able to send aid. Pahoran could have finished his letter by scolding Moroni for the assumptions and false accusations he made. But instead, he quickly forgave him. Not only that, he chose to see the good in Moroni's heart; Moroni's strong words were evidence of how much he cared for his country and the freedom of his people. Pahoran recognized and acknowledged an important truth: they were both on the same side.

We will certainly encounter those who believe things that aren't true. Sometimes those beliefs may even cause them to lash out at us. We can respond by choosing to see the goodness in their hearts. That's not to say we shouldn't stand up for ourselves. But recognizing that, deep down, we are all ultimately on the same side can help us to know the best way to respond and help us to forgive more quickly.