To Send a Sword 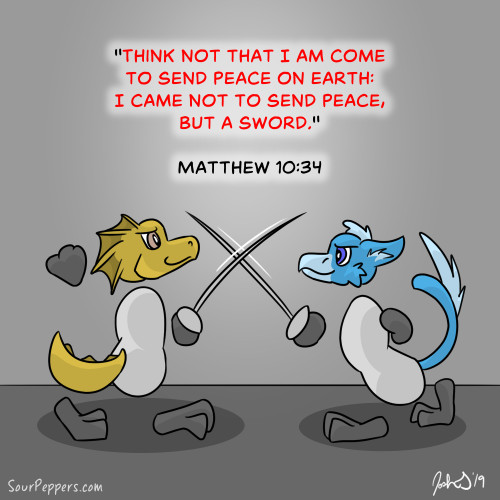 What do we do when we're searching for answers--or even when we're not--and we encounter something that clashes with our already established beliefs? It's very easy, natural even, to interpret these differences as a personal attack.  And of course, the natural response to an attack is to either "fight" or "flee"; to respond with hostility or fear. However, there is ample evidence that earnest truth seekers are expected to engage with opinions that differ from our own but to do so in a way that maximizes the chances of both parties coming away edified.

That we shouldn't simply shy away from conflict is hinted by the Savior's own declaration that He "came not to send peace, but a sword." How do we reconcile this with the angelic declaration, "on earth peace, good will toward men" (Luke 2:14)? We read a clarification of this saying in Luke 12:51, in which the word "sword" is replaced with "division." Clearly, the preaching of the Gospel of Christ has caused and will continue to cause division amongst those who hear it. Not merely division between believers and non-believers, but also between believers of different sects. Differences in interpretation of scripture have caused no small amount of contention. This shouldn't surprise us. We are, after all, talking about weighty matters, including the salvation of the souls of all men and women to ever be born. God does not want us to be lukewarm when it comes to the Gospel. Rather, He wants us to diligently, even zealously seek truth and then treasure it and defend it once found.

However, that doesn't mean we must consider those whose beliefs differ from our own to be our enemies. (And even if we did, we'd still be commanded to love them.) The Lord's purpose is not to stir people up to anger. How then do we engage without becoming hostile? The imagery of a sword--as opposed to another more blunt weapon like a club or staff--is instructive. In Hebrews 4:12 the word of God is described as being "sharper than any twoedged sword... to the dividing asunder of soul and spirit, and of the joints and marrow, and is a discerner of the thoughts and intents of the heart." In this passage, the keen-edged sword appears to be an instrument of surgical precision, capable of dividing truth from error. We can and must do the same when encountering differing belief systems. Divide truth from error and good from bad, even from the same source. Nobody but Christ is ever 100% correct. But rarely, if ever, will we encounter someone who is 100% in error. Everyone has something we can learn from. It's up to us to discover what that is while also holding firm to the truth we have already received.

Let us develop the courage to wield the sword of the word of God. When we must strike down error, let us do so without striking down friends.

This is the fifth in a series of Sour Peppers on personal revelation.
at 7:01 PM