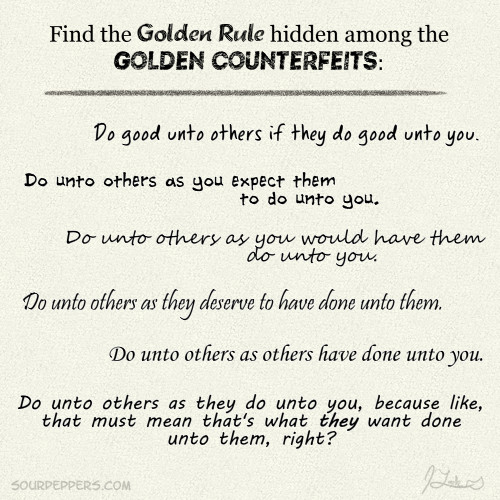 Like a con-artist trying to trade us cheap brass trinkets in exchange for our gold, the world tries to promote its own systems of morality instead of the only one that will ultimately lead to mutual peace and good will. The exquisitely simple code of conduct that has come to be known as "The Golden Rule" can be found in all major religions today, and even some secular belief systems.

To be extra clear, the Golden Rule is not the same thing as the rule of reciprocity, or "tit for tat." This is the lesser law of "eye for an eye, tooth for a tooth" which is exhibited even by other animals in nature. Groups of certain mammal species, for instance, have been known to share food with other members who did not find as much when hunting or foraging on their own, but only if that member shares in turn when they have a good day and others aren't as lucky. This approach to life is satisfying to our sense of fairness and justice. But it is also, at its core, selfish. It essentially states that "I will only do good unto you if there's something in it for me."

Inspired religious and moral leaders of Confucianism, Buddhism, Hinduism, Judaism, Taoism, Zoroastrianism, and of course Jesus Christ Himself have taught that we can do so much better than this. To adopt the Golden Rule is to say, "I will do good unto you, even if you do not do so unto me." It has nothing to do with what you will get in return. It has everything to do with an inherent love for others, and--from a Christian perspective--a love for God. For remember that when we do unto others, we are doing so unto Him (Matthew 25:40).
at 8:52 AM