We need each other 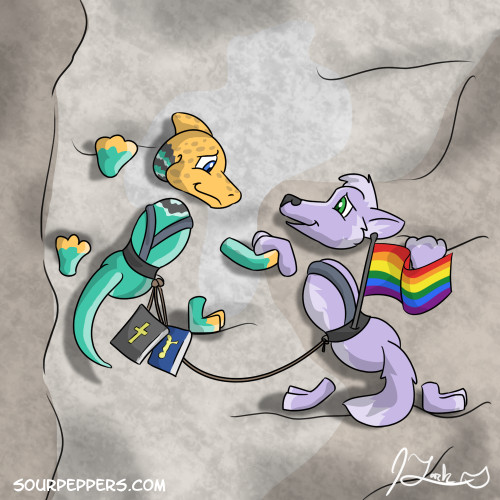 Believe it or not, I actually wasn't planning on this post to be done for Pride month. Kind of cool that it worked out that way though.

Frequently, the relationship between LGBTQ and religious communities (specifically, those that believe homosexual relations to be against God's commandments) has been adversarial at best. It's not hard to see why. Even ignoring the acts of hatred and bigotry that have been committed against LGBTQ persons in the name of religion, it can be difficult to reconcile the philosophy of "Hate the sin, love the sinner," when what one group considers to be fundamental to their identity is considered by the other to be sinful.

Perhaps it would be simpler if both sides could simply leave each other alone and allow each to live their lives according to their own beliefs of right and wrong. But not only would it be nearly impossible to isolate ourselves from each other so fully that we'd never come into conflict with each other, but we would also be much poorer for it.

I'm concerned by how blasé some are to the idea of forcing someone to go against their religious convictions (or punishing them for not doing so) and equating said convictions with hatred and bigotry. I understand the concern that not doing so will enable and embolden individuals who really are bigots and homophobes. But when it comes to a person's constitutionally protected right of free exercise of religion, we need a much more nuanced approach than painting them both with the same brush. We can and must differentiate between those who sincerely believe they are doing the best they can to obey God's commandments and those who really do treat LGBTQ persons with disdain, hatred, and contempt.

On the other hand, I think many well-meaning people of faith go beyond the mark when it comes to trying to live their religious convictions. When interacting with those from the LGBTQ community, consider what the Savior would do. Jesus spoke and ate with sinners, He associated with them, He blessed them, and He forgave them. And even if there were a single one of us who didn't fall under the category of "sinners," He commanded us to do the things He did. The commandments of God are not a scorched-earth policy. Just because something might make life easier for someone who is LGBTQ doesn't make it against the commandments. When in doubt, we ought to err on the side of inclusion, tolerance, and acceptance.

I'm not asking anybody to change their beliefs of right and wrong outright nor to stop fighting for what they believe to be just. I only wish for us all to try to understand one another, to assume the best about each other, and to love one another.

I myself am a member of the Church of Jesus Christ of Latter-day Saints. I sustain the Church's leaders and their teachings, including the Proclamation to the World, which declares that "Marriage between man and woman is essential to [God's] eternal plan," and that "Gender is an essential characteristic of individual premortal, mortal, and eternal identity and purpose." However, I also believe in the 11th Article of Faith and in allowing all men and women the privilege of living and worshiping (or not) as they so choose. I also believe that there are things that God has not yet revealed, but that He will in His own due time (9th Article of Faith). Perhaps He will reveal more on this particular subject when we are ready for it.

Moreover, we benefit when we expose ourselves to ideas that disagree with our own when they come from a place of sincerity and respect (which sometimes seems hard to come by, but such sources are out there). We also benefit when we treat ideas that reinforce what we already believe with a higher degree of scrutiny. It's okay to challenge our own beliefs. The ones that are true will withstand and the ones that are not will fall by the wayside where they belong.

I have gained invaluable friendships among those who identify as LGBTQ. Some of whom are among the most Christlike individuals I've met and have treated me with love and respect in spite of our differences. I hope that I have been a true friend to them in return. I've learned a lot from them and the discussions and occasional lively debates we've shared. From these experiences I know one thing: we are better together. We can't just assume that we have all the answers. We benefit when we challenge one another but do so in a spirit of love and a desire to make ourselves and each other better.

I don't have all the answers. I, like so many, am doing the best that I can to follow what I believe to be God's will for me. I seek often to reevaluate where I am and where He wants me to be, and I believe that to be true about others who are sincerely trying to learn what's right. I don't know all the reasons why we so often come to different conclusions (I may write about that particular topic in the future). But I do believe that the more we humble ourselves, sincerely seek the truth, and are willing to correct ourselves when needed, we will come closer to the truth.

Sincerely wishing everyone a Happy Pride Month. 🏳‍🌈 God loves you, and so do I. And those are two things that I do know for sure.
at 8:10 PM