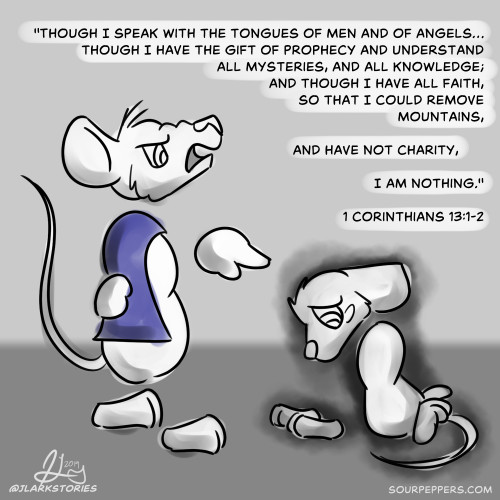 It doesn't matter how spiritual we are or even how right we are. If we do not exercise charity--that is, the pure love of Christ--when teaching or correcting someone, it amounts to nothing. Coercion may yield immediate compliance, but will not result in long-term repentance or conversion.

This piece was a commission. If you would like to support Sour Peppers, you can do so by commissioning an illustration of a favorite scripture, inspirational quote, or something similar. More details are available here!
at 6:38 PM No comments: 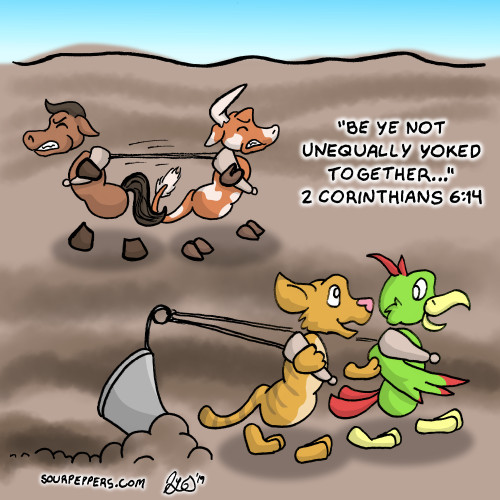 The warning from Paul to be "not unequally yoked together with unbelievers" has been interpreted in a number of ways. Some have taken it to mean that we should not associate with or enter relationships with those who do not share our beliefs. But I don't think Paul's words are of a spirit of separatism. After all, his and our Lord associated with those considered to be the dross of the world and commanded that we do as we saw Him do. Paul warns against adopting incorrect traditions and practices from others, but I think there is another, deeper but no less important meaning to the caution against being "unequally yoked together." When we associate with others, we should not assume a superior or adversarial position to one another. To do so is akin to trying to pull each other in opposite directions: it wastes a lot of energy without accomplishing much (other than making ourselves feel exhausted and irritated). Rather, we should try to pull together. After all, there is much we can learn from one another, even when we disagree on important matters.
There may be times when our efforts to pull together do not yield productive results. At such times it may be the right thing to simply leave the yoke rather than to continue in contention and strife. But there's nearly always some common good that we can put our collective efforts behind. When we focus on doing that, we'll find that we strengthen one another and accomplish much good together, especially when the yoke that we share is the one given to us by the Savior (Matthew 11:29-30).
at 2:40 PM No comments: 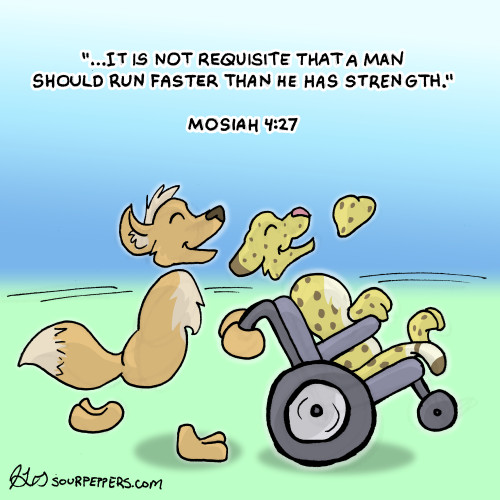 It can be discouraging to look at the progress and accomplishments of others and feel like we're being left behind. Just remember that everyone has their own unique set of abilities and challenges. God is pleased with whatever you can give, however large or small our offering may appear. And if we have means to spare, He's especially pleased when we lend what we have to others!
at 3:09 PM No comments:

A Labor to Perform 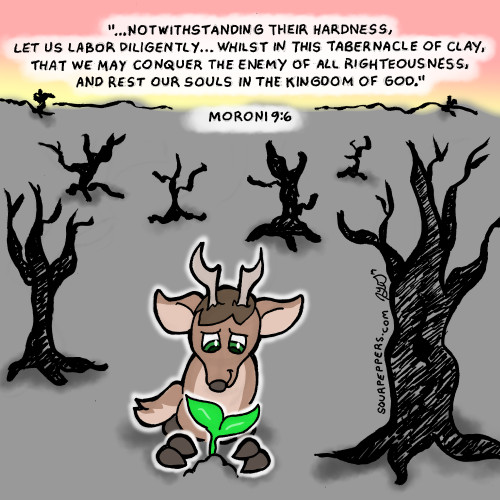 This was written by Mormon to his son Moroni near the end of the civilization of their people, the Nephites. They had grown exceedingly wicked, to the point that they were on the verge of destruction. In only a few more years, the Nephites would be completely wiped out because they refused to repent. Mormon knew this. And yet he told his son not to give up or stop laboring. No matter how bleak or hopeless their future seemed, they were still on the earth, which meant they still had a work to do. We are indebted to them for their continued labors in spite of the hardness of the hearts of those around them. Because of it, we have the Book of Mormon, which is an account of their people, but more importantly another testimony of the divinity of Jesus Christ.

We too should not give up hope, nor should we stop trying to make the world better. It's tempting sometimes to look at all the things wrong with the world and decide to just let everything burn while we wait for the Second Coming. But God does not want us to stand idly by. If we can make life better for even a single person, then our efforts have meaning.
at 7:24 PM 1 comment: