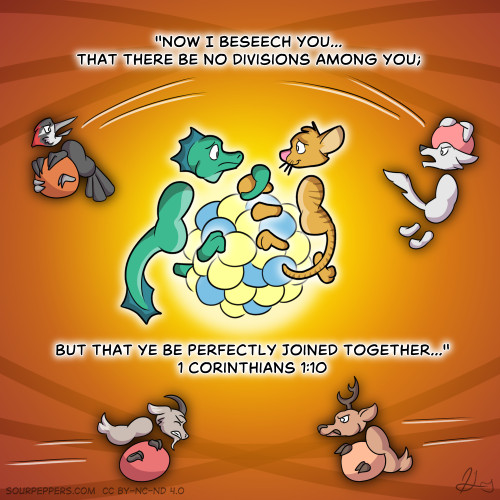 At times, it feels as if our world has never been more divided. Such divisions may be superficial, political, religious, or ideological in nature. It's easy to justify divisiveness when we convince ourselves that the other side is wrong, misguided, stupid, or even evil. But what does God want for us?

During His great Intercessory Prayer, Jesus prayed to the Father that He would "keep through thine own name those whom thou hast given me, that they may be one, as we are" (St. John 17:11, emphasis added). In the Pauline epistles, we find numerous admonitions to be united in Christ (see for example 2 Corinthians 13:11, Galatians 3:28, and Ephesians 4:3-5). And members of the Church of Jesus Christ of Latter-day Saints have similarly been warned, "If ye are not one, ye are not mine" (D&C 38:27, emphasis added).

Certainly God wants us to remain separate from incorrect doctrines and harmful traditions. But there are many things that we can unite on:

This is, of course, a two-way street; if we encounter someone who isn't willing to put a good-faith effort into being more united, our own efforts alone will not be enough to bridge the divide. But even then, we can do our part to not open any existing divides even further.

Why then is unity so important? I can think of at least two reasons: avoiding the damage that comes from a lack of unity, and harnessing the power that comes from embracing it.

Entropy is the process by which the universe becomes more disorganized over time. Physicists tell us that the universe is expanding, and that the rate of expansion is accelerating. Eventually, everything will be moving away from each other so fast that not even light will be able to travel from one body to another without being completely lost. As galaxies, stars, planets, and eventually individual particles continue to move further and further apart from each other, eventually the universe will reach a point where there is no more interaction between anything at all. All the same mass and energy will be there, but it will be completely disorganized. Homogeneous. Inert. Dead. Unable to ever do anything useful or interesting ever again.

While this eventual "heat death" of the universe may be countless billions of years away, we can see its parallels in our lives today. The farther apart two people, political parties, or organizations drift from one another, the less likely they are to interact in a way that produces positive change. In addition, once two groups have separated from each other, schisms often begin to appear within the groups themselves, further reducing their effectiveness.

Entropy is accelerated by heat. When particles are heated up, they break apart and spread out much faster than particles in a more stable environment. "Social entropy" is also caused by a type of heat; when we treat one another with contempt rather than compassion, we move farther apart. Eventually we reach a point where we lack the cohesion required to achieve a desirable outcome; so much energy is spent on generating heat rather than results.

Many of the forces that cause divisiveness come naturally. However, it's also tempting at times to deliberately fan the flames. Anger and hatred have been used to motivate the masses to take action. Historical and even scriptural accounts are full of examples. While the outcomes may not have always been positive, it can't be denied that they were frequently powerful. Much like splitting an atom, stirring up people to anger releases a tremendous amount of energy that can be harnessed towards accomplishing one's desires. Unfortunately, there are dangers in this approach. The nuclear reaction required to split an atom may be powerful, but they are also dangerous. Under certain conditions, a nuclear reaction could get out of control, causing a tremendous amount of damage. Also, even when the process goes smoothly, the byproduct is toxic nuclear waste that damages anyone who so much as gets close to it.

But we don't need to sacrifice effectiveness in the name of "keeping the peace". Consider the opposite of splitting an atom; that is, nuclear fusion instead of fission. Nuclear fusion is the process of combining two atoms into one. It produces much less radioactive waste. In spite of this, we don't currently have any power plants that produce energy by nuclear fusion. That's because the process is difficult to sustain for long periods of time. But scientists are still looking for a way to pull it off, because the nuclear fusion releases many times the amount of energy released from fission, making it a highly sought after source of abundant, clean energy.

Finding a way to work together may take a lot more effort than splitting people apart. But the times when we've managed it in the past, we've accomplished amazing things. Our potential for accomplishing good is much greater, and the risk of doing harm is greatly reduced.

We can accomplish the work that God wants us to do much more effectively when we make the effort to do it together.